Skip to main content
Office of Fire Prevention and Control

The 25th Annual Fallen Firefighters Memorial Ceremony will be held on October 11, 2022 at the Empire State Plaza in Albany, NY.

Twenty-four names were added to the Memorial Wall in the year 2021. Please take a moment to view the 2021 NYS Fallen Firefighters Memorial Tribute Video below.

With 2020 Ceremony being postponed due to the COVID-19 pandemic, the 21 firefighters added to the wall in 2020 were also honored at the 2021 Ceremony.

The creation of a permanent, official New York State memorial to honor the memory and heroism of all NYS firefighters who died in the line of duty, was a vision shared by three men in 1997: Governor George E. Pataki, son of a volunteer firefighter; James A. McGowan, a retired FDNY Lieutenant and President of the NYS Professional Firefighters Association, Inc.; and Gunnar Neilson, President of the Firemens Association of the State of New York.

They enlisted the support of the Legislature's leadership, Senator Joseph Bruno and Assemblyman Sheldon Silver, for an appropriation which would make the vision a reality. Funding was allocated in equal amounts by the Legislature and the Governor's office. Governor Pataki announced the project on August 21, 1997.

The NYS Office of General Services (OGS), directed by Commissioner Joseph J. Seymour, was charged with the responsibility for planning, designing and overseeing construction of the Memorial.

A prominent location on the Empire State Plaza, adjacent to The Egg, was selected. Office of General Services architect James Jamieson, AIA, designed the 106 x 120 site as a park-like area of repose. The grass is bordered by tall, box trimmed Norway maple trees. The 38' diameter, central-paved plaza of charcoal and red brick pavers forming a Maltese Cross is the surface on which the podium base of the sculpture is mounted. Brick walkways lead from the east and west sides into the Cross and a curved granite bench faces the sculpture.

Robert Eccleston, then 33, of Schuyler Falls, NY, was selected from among several sculptors, who submitted concepts, drawings and models, to receive the commission. The cast bronze sculpture depicts two firefighters rescuing an injured firefighter-brother and dragging him away from the wall of death where the names of the fallen are inscribed. The stirring work of art is patinaed in black, with burnished highlights on the faces and the detail of the 1960s turn-out gear. Every inch of Eccleston's first major commission is charged with emotion, energy and motion. It was cast at the Tallix Foundry in Beacon, NY.

The sculpture was unveiled and dedicated by Governor Pataki on October 5, 1998. The second phase of the project got underway immediately building a 54 x 15 Barre granite wall at the rear of the site that will forever bear the names of the noble men and women of the fire service who gave their lives to save others. On October 5, 1999, when Governor Pataki dedicated the wall, 1,805 names had been sandblasted into the marble, with the earliest dating from a line of duty death in 1811.

The NYS Fallen Firefighters Memorial is the collaborative effort of many in the public and private sectors. It stands as an enduring tribute to the fire service of New York State to whom we all owe immeasurable thanks and prayers. The Memorial will remain forever as a symbol of the gratitude of New York's citizens and a tribute to the valor and courage that exemplifies the finest of New York's bravest. 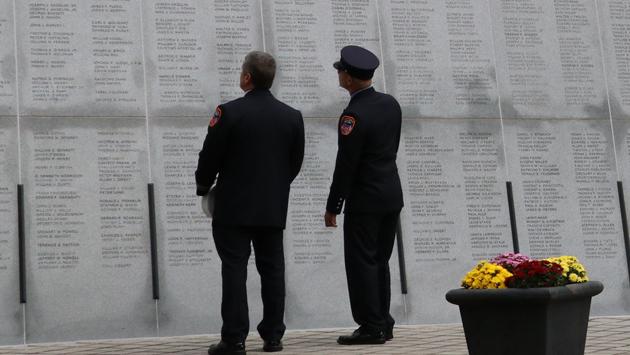 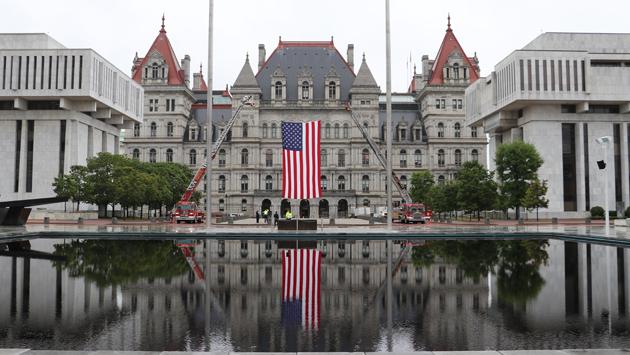 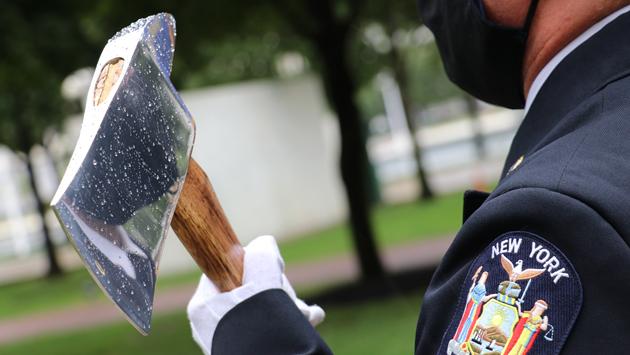 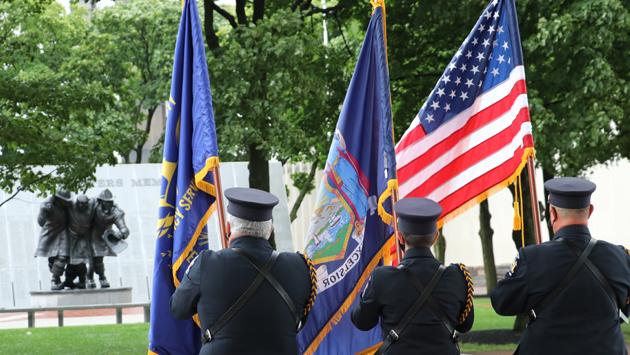 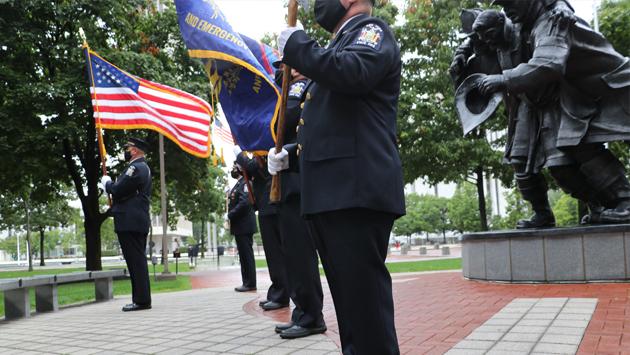 The granite wall that will forever bear the names of those who gave their lives to save others.

Ladder trucks raise the flag on the Empire State Plaza.